Join Us for an Interview With Jim Averbeck, Author of IN A BLUE ROOM 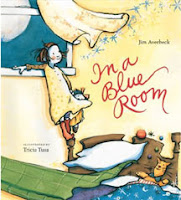 Lynn: Hi Jim. Welcome to the Imaginary Blog and congratulations on the launch of your new picture book, In a Blue Room, illustrated by Tricia Tusa.

Jim: Thanks. Nice to be here.

Lynn: Could you please give us a little background on your inspiration for this book? What sparked your first ideas? Do your ideas usually come first in words or images?

Jim: I belong to a critique group, the Revisionaries, and I had a due date coming up for turning something in. I thought about a remarkable book by my friend and fellow Revisionary, Yuyi Morales, called “Just a Minute.” Yuyi had begun that as an assignment for an illustration class we took together with Ashley Wolff. The assignment was to create a series of thumbnail sketches for a concept book- that is a book about an abstract concept. Yuyi’s was a counting book, but told a fascinating story. So I thought, what if I took that assignment and also came up with a story that was, at its heart, a concept book. I decided to try a book about colors.

Then I remembered how when I was a kid, the teacher told us that “they” had done experiments showing how different colors elicited different responses from people. Blue was supposed to be soothing. So I decided I would write a soothing book about a blue room. It even sounded calming--bluuuuue rooooom. I was at my house in the country at the time and I remember looking out and noticing how the landscape, so colorful during the day, was rendered blue by the full moon. I guess all these things just jumbled around in my head and I wrote the first draft in a couple of hours.

Lynn: Since this is an imaginary blog—could you please offer aspiring authors any imagination advice, for example how do you keep going when what you are imagining is not yet showing up for real on the page?

Jim: The gap between imagination and reality is a big one. That’s because our brain is such an amazing organ that it leaps over all the holes and fills in all the inconsistencies so we think what we are imagining is a whole, coherent thing. Unfortunately, bringing what is in our brain into reality reveals all those holes and inconsistencies. But this isn’t a bad thing, really. Holes revealed can be filled. In writing, you fill the gaps with stepping stones called revision. Put down what you can, then go back again and again and imagine the stones needed to fill things in. Soon you will have a nice little path from beginning to end and your story will be there.

Lynn: I have to ask, is blue your favorite color?

Jim: Yes. I tend to be a fairly stressed out guy, so I like to have soothing blue things around me. In fact, when I write at home I am indeed “in a blue room.”

Lynn: What music, environment, or food feeds your imagination?

Jim: Sometimes when I write I listen to trance-y music with no words or words in a language I don’t understand. Dead Can Dance inspires me. Also Kitka, a bay area group who sings Eastern European folk music. I listen to classical a lot. Sometimes I match what I listen to with what I am writing. I listened to African music while writing my picture book “The Market Bowl” set in Cameroon. I listened to blues while writing a story about Bessie Smith.

As for environment, I have a house in the country where I love to write. There are no distractions. No gym. No TV. Just me, 40 acres of land and lots of wild bunnies. And if bunnies don’t put you in the mood to write children’s books, nothing will.

Food never inspires me to write, just to procrastinate. The brownie break is practically a form of punctuation when I write, I have so many of them.

Lynn: It seems (and reviewers agree) you’ve chosen the perfect spare words to tell the story and allow room for Tricia Tusa’s art to magically weave it all together. Has your wording and word count changed much from the first draft to final manuscript? Please tell us about your revision process.

Jim: The oldest draft I could find was 270 words. The final story is 221 words. The first wave of revision was done with my critique group, the aforementioned Revisionaries. I remember that early on, they wanted more relationship between Mama and Alice and also that they needed more clarity about Alice being obsessed with the color blue. The next wave was with my editor, the incredibly gifted Samantha McFerrin. Even though the manuscript submitted to her was no more than 270 words, she felt the beginning wasn’t spare and lyrical enough to match the ending.

I realized that one thing that everyone seemed to be overlooking was the fact that each item Mama offered Alice appealed to a different sense – smell, taste, touch, hearing and finally sight. So I chucked out a whole bunch of banter between Mama and Alice and made explicit the focus on the sensual aspects of the comforts Mama was offering Alice. It made the relationship between the two less wordy and more universal - emphasizing the comfort and care that our mothers give us. And it cut 49 words out in the process. Then Sam and I went through every word making sure each one was just right. I have a folder full of emails about whether Mama should bring Alice a blanket or a cover. Which was the most comforting? Which sound the most soothing? (I finally decided on quilt.)

Lynn: As a child did you have any memorable moon connections or experiences?

Jim: I was 6 when we first landed on the moon. That was something that fired the imagination of the world, and I was no exception. What child doesn’t experience the moon as an object of wonder? It gets bigger and smaller. It is filled with crater pictures. It follows your car when you are driving. For all its heat the sun is a distant cold thing. You can’t even look at it. But the moon….the moon is your friend. 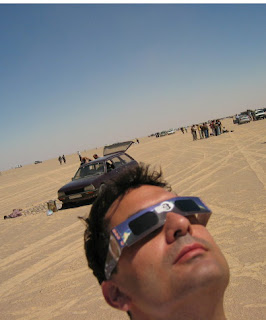 Jim in his spacey-cool shades viewing a total solar eclipse in March of 2006. Jim says he was "watching the moon traverse the sun. I was at the Jalu oasis in Libya."

Lynn: Do you currently have any favorite moon-viewing spots in San Francisco or elsewhere?

Jim: My house in San Francisco is on the southern slope of a hill. We have big windows and, when the fog isn’t in, the moon shines right onto my bed at night. I love to just lie there and watch it travel across the sky.

Lynn: I hear you're writing a novel. Is that a top-secret project or could you tell us a little about it?

Jim: It’s a mystery thriller set in the Fairmont Hotel in San Francisco in 1956. An orphan boy’s aunt is kidnapped. The protagonist Jack finds help from a most unusual source. That’s all I’ll say now. 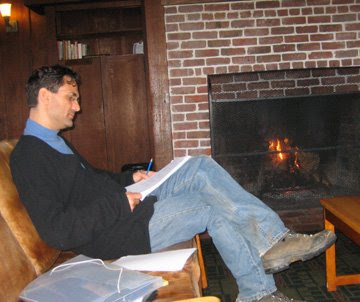 Lynn: What were your favorite books as a child?

Jim: Richard Scarry did a book called “365 Stories, One for Each Day of the Year” that I loved. Each story was tied to a certain date, but I am afraid I was a bad boy and broke the rules. I read the ones I loved best over and over, no matter what the date. There was one about a tiger up a tree that I loved. Also “D’Aulaires’ Norse Gods and Giants” which was in my school library in the 3rd grade. Mighty Thor! Wise Odin! Gentle Balder. I checked it out so often that the librarian had to tell me to give someone else a chance.

Lynn: What childhood experience(s) influenced you in deciding to become an author?

Jim: Nothing from my childhood. I was a late bloomer. I didn’t realize I wanted to write until I was 30.

Lynn: Did you have any “back up” career plan(s)?

Jim: Well, I have a degree in engineering and I used to design bridges and roads. I guess I could go back to that, but hopefully enough people will buy my book that I won’t have to.

Lynn: Did you experience any unusual surprises on your journey to publication?

Jim: I’ve experienced a lot of kind encouragement from editors- Allyn Johnston, Arthur Levine, Patti Gauch, Sam to name a few. But I don’t think that is unusual or surprising. Kid’s lit is a pretty kind industry.

Lynn: There is a wonderful surprise for the reader both text and illustration-wise at the end of In a Blue Room. Were you surprised too? Any thoughts on how Tricia Tusa captured your story in the illustrations?

Jim: Tricia’s interpretation brought the story to a new level. At the end, when she zooms out and we see that the blue room is the planet earth- that is masterly. It added a more universal layer to the end and also, I think, a subtle environmental message. It is really beautiful. One reviewer was concerned that the text at the beginning reads “in a blue room” but Alice’s walls are yellow. I don’t think the reviewer understood that, in Tricia’s interpretation, Alice was in a figurative blue room the whole time – the planet earth. Or perhaps she just felt children would be too literal to see that. But I have faith in children. They’re smarter than most people think. And surely the parents of the more literal-minded ones will be able to explain.

Lynn: If sleepy Alice of In a Blue Moon were to give advice to another (not quite fully actualized) children's book character regarding how to make one’s author capture the right words on the page, what would Alice’s advice be?

Jim: Alice would likely not understand this question any more than I do. 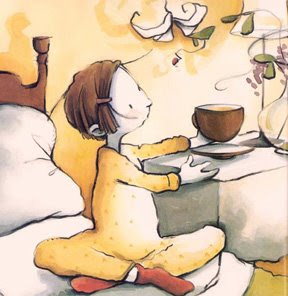 Lynn: Okay then, what question do you often ask yourself--and what is the current answer? 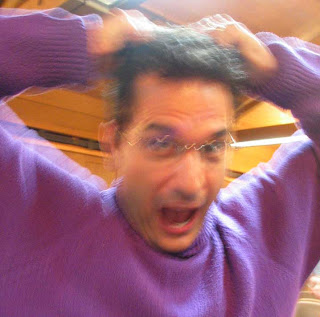 Lynn: Your jacket flap bio on In a Blue Room mentions your dog. Is this by any chance an imaginary dog?

Jim: I can’t let you in on all my secrets.

Let's make Jim's Amazon Ranking go up and down by buying IN A BLUE ROOM .

And I'm all for brownies as a form of punctuation.

Looking forward to his novel, too. 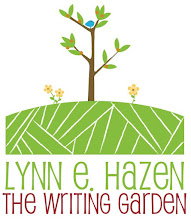 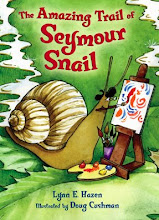 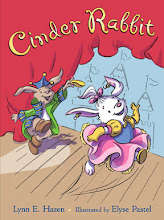 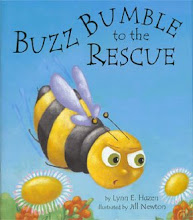 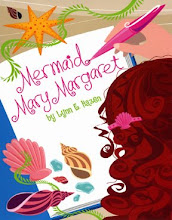